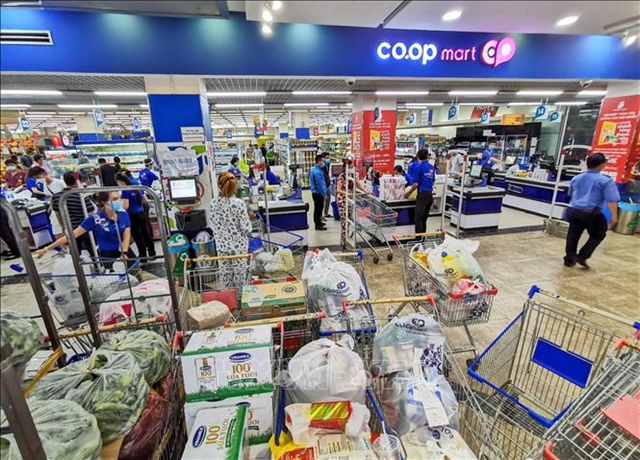 People shop at a Co.op Mart in HCM City. The government has confirmed that controlling commodity prices is a top priority. Photo VNA/VNS

Khái ordered them to stay on top of the supply and demand for these products and to be prepared to heavily penalize companies that engage in price manipulation practices. He urged them to work with the media to ensure people are well informed, to avoid panic and hoarding.

The Deputy Prime Minister said that, at the moment, there are no plans to increase the prices of major commodities under the government’s price control program and administrative costs. However, departments should prepare for possible future adjustments.

Responding to a question about the government’s recent proposal to reduce the environmental tax on petroleum products by 50%, Khái said the reduction is likely to lower gasoline prices in the domestic market compared to neighboring countries. As this could lead to an increase in gasoline smuggling across borders, he called on local authorities and border guards to step up their efforts in the fight against smugglers.

He acknowledged that Việt Nam would likely face many difficulties in regulating prices, especially for petroleum products, as the global market remains unstable and volatile as the Russian-Ukrainian conflict drags on.

Economists called on ministries and businesses to prepare for all scenarios to adapt to sudden changes and mitigate damage to the economy.

“Our top priority is to ensure stability in the supply of goods and services, to prevent price spikes and panic,” he said.

He instructed the State Bank of Việt Nam to conduct a comprehensive review of the economy to design resilient monetary policies that support the government’s price control effort and economic recovery.

Việt Nam’s CPI rose 1% in February and 1.42% from the same period last year, according to Việt Nam’s General Statistics Office.

The GSO pointed out that core inflation in February rose 0.49% from the previous month and 0.68% from the same period last year. In the first two months, core inflation increased by 0.67% year-on-year, which is lower than the overall average CPI, reflecting the fluctuation in consumer prices mainly due to the rise food and fuel prices. VNS