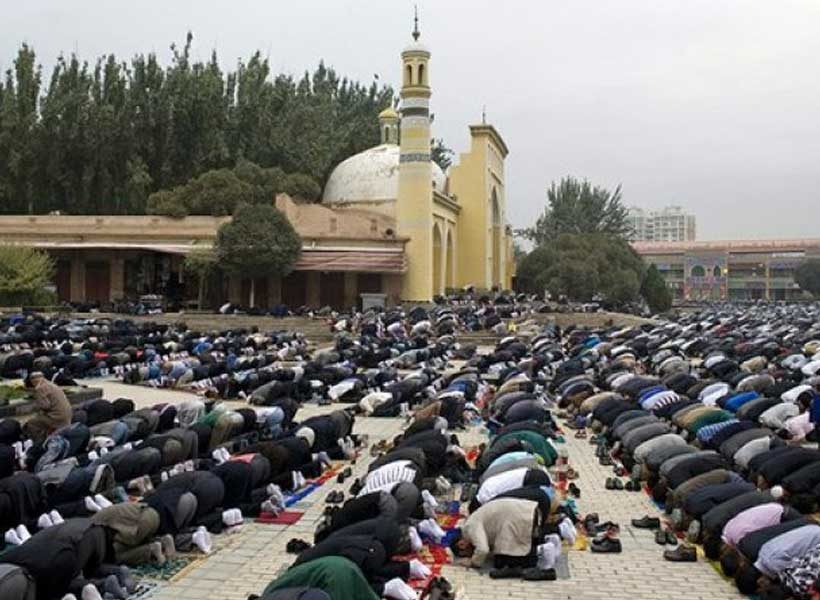 Xinjiang Autonomous Province has acquired an important economic position since the launch of the ancient Silk Road; it has been a meeting center between Chinese traders and foreigners, which has made it an active city in economic and cultural communication. In addition to trade, Xinjiang is rich in natural resources. The city of “Karamay” for example, its name means black oil field in Uyghur language, it is classified as one of the richest Chinese cities in natural resources and has become a major source of oil energy in China. As for “Urumqi”, it means beautiful pastures in the Mongolian language. These examples demonstrate the rich nature of Xinjiang, as well as its strategic location, which forms a link between China and the Eurasian region.

Xinjang Province has a long duration of sunshine, with an annual light level of 2817.70 hours. The amount of water resources in Xinjiang is about 96 billion 282 million cubic meters, and it is rich in glacial resources, as there are about 10,860 small and large blocks of ice. This province is characterized by the abundance of lakes, as there are about 139 lakes with an area of â€‹â€‹more than one square kilometer, and there are more than 570 rivers in Xinjiang, including 270 mountain springs. . Xinjiang is also rich in winds, as the wind blows more and more in its territory and lasts for long periods, and the total wind power reserve is 872 million kilowatts per hour. Wind is heavily exploited in the power generation process in Xinjiang. It is rich in minerals, 138 mines have been discovered. The region is characterized by abundant reserves of petroleum, natural gas, coal, gold, copper, chromium, nickel, precious metals, mineral salts and building materials. Xinjiang contains 30% of the amount of oil resources on Chinese territory, 34% natural gas and 40% natural coal. This region is the world’s second largest supplier of natural nitric acid. In addition to its natural resources, Xinjiang is also distinguished by its plant and animal diversity.

Recently, there have been many comments published which regard the Chinese regime as unfair and use a repressive policy towards Uyghurs. According to these assumptions, the spread of terrorist ideology and other dangerous ideas is due to the social policy carried out by the Chinese government. However, it is easy to fabricate rumors that have nothing to do with reality, but it is difficult to prove this information with numbers and facts, because it has nothing to do with the truth. Therefore, it is necessary to show the true reality of Xinjiang with facts and figures, and to refute all the fabrications and illusions that are circulating.

In 1954, with joint cooperation between the central government and the regional government, the “Xinjiang Production and Construction Corps” was established, its main job being land reclamation and border guard. This body plays an important role in economic and social stability, national solidarity, the unity of the homeland and the protection of borders. On October 1, 1949, the People’s Republic of China was established, and since that date Xinjiang has entered a new era of progress, openness and prosperity. With the founding of New China, another kind of interaction emerged between different nationalities, based on equality, friendship, cooperation and solidarity, and a national system of regional self-government was established in accordance with the Charter of the Chinese People’s Political Consultative Conference. In 1955, the Xinjiang Uyghur Autonomous Region was officially established, which strengthened cooperation between different nationalities and supported the political, economic and cultural development of Xinjiang society.

Xinjiang has made great strides since 1978 with China’s implementation of the reform and opening-up policy. This province has achieved remarkable achievements in the fields of science and technology, economy, politics, education and culture. The housing and infrastructure situation improved considerably, so that the people of Xinjiang lived in peace and quiet. The reform policy adopted by the Chinese government towards Xinjiang has continuously increased investment in fixed assets, and highways, railways and civil aviation have experienced rapid development. The central government increased the amount of financial aid and transfer payments from year to year to Xinjiang, the financial aid provided by the central government accounted for two-thirds of Xinjiang’s expenditure, and the financial investment of the central government. accounted for over 80% in major construction projects in Xinjiang.

Nur Bekri, chairman of the Xinjiang regional government said, â€œThe state has made an important strategic decision to achieve rapid development and lasting stability in Xinjiang, and the support of the central government in Xinjiang is unprecedented, so that investment funds have been spared, and construction projects have multiplied. People enjoy large-scale livelihoods, and this symbolizes that a new page has opened for the development of Xinjiang.

In 2010, the Chinese Ministry of Culture decided to launch a number of projects to strengthen the protection of cultural heritage in Xinjiang, control the cultural market and strengthen heritage industries in Xinjiang. In the same year, the Ministry of Transport issued a joint statement with the Xinjiang regional government pledging to spend more money to build roads in Xinjiang, covering 50% of construction costs. The Xinjiang Resource Tax Reform Regulations, jointly issued by the Ministry of Finance and the state tax administration, have been implemented, making Xinjiang the first region in China to initiate this reform. The regulation represents a shift to taxing crude oil and natural gas based on price, not volume. The objective of the reform is to increase the local incomes of Xinjiang, which is rich in resources.

Chinese military hospitals are implementing plan to help Xinjiang with medical expertise and training of medical personnel. Local governments of 19 Chinese provinces and municipalities, including Beijing, Shanghai, Guangdong, Zhejiang and Liaoning, have jointly pledged to “coordinate aid” to support projects to promote the development of agriculture, industry. , technology, education and health services in the region. Xinjiang’s local government is also working to develop the region, including improving livestock management, advancing technology to support an efficient and environmentally friendly coal mining industry, and taking measures to boost domestic tourism.

No one cares more about Hong Kong’s democracy and prosperity than the central government: Wang Yi