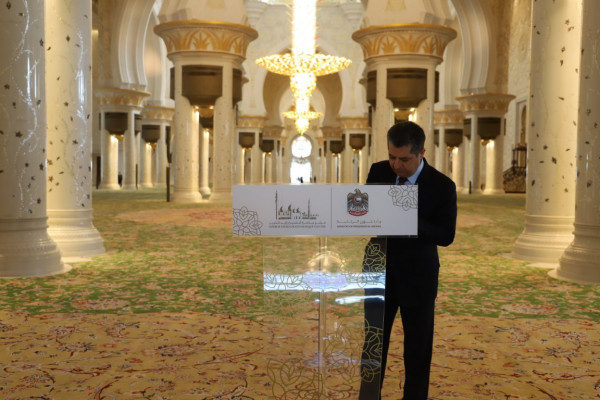 ABU DHABI, 26th January, 2022 (WAM) — The Prime Minister of the Kurdistan Region of Iraq, Masrour Barzani visited the Sheikh Zayed Grand Mosque today, as part of his visit to the United Arab Emirates.

Dr. Yousif Al Obaili, director general of the Sheikh Zayed Grand Mosque Center, accompanied Barzani on a tour of the halls and exterior corridors of the mosque. He was briefed by one of the Centre’s cultural tour specialists on the mosque’s noble message which highlights the notions of coexistence, tolerance and openness to other cultures, inspired by the rich heritage of the late founder of the nation, and on the prominent role of the mosque in highlighting Islamic culture. true essence and promote cross-cultural communication around the world.

Barzani was also briefed on the history, components and aesthetic characteristics of Islamic art and architecture which are evident in every corner of this grand edifice which creates a fascinating fusion of various architectural styles from different eras reflecting commonalities between cultures and uniting the world through art.

At the end of the visit, the guest was presented with two of the centre’s distinctive publications. The first entitled “Spaces of Light” presenting the winning photographs of the “Spaces of Light” photography prize, organized each year by the Center to celebrate the scenic aesthetics and visual culture of the mosque, and another copy of a book titled “Houses of God” on places of worship in Islamic history, including the Sheikh Zayed Grand Mosque.