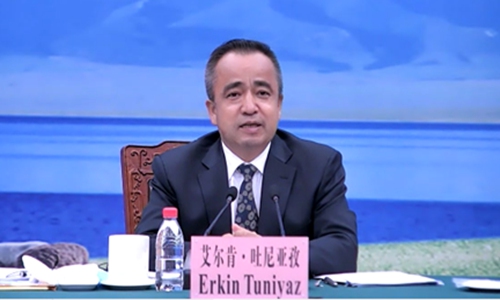 The 29th meeting of the Standing Committee of the People’s Congress of the Xinjiang Uyghur Autonomous Region on Thursday approved Zakir’s resignation as chairman of the Xinjiang regional government and appointed Tuniyaz as interim chairman.

Born in December 1961 in Aksu Prefecture in Xinjiang, Tuniyaz studied mathematics at Changji Normal College between 1980 and 1983, and obtained a master’s degree in economics in 1999 from Xinjiang University.

Tuniyaz was deputy head of the organization department of the Xinjiang Committee of the Communist Party of China and deputy secretary of the Hotan Party before becoming vice chairman of the Xinjiang regional government in 2008.

According to Tuniyaz to resume On people.com.cn, he studied law at the Party School of the Communist Party of China Central Committee between 2009 and 2011 and was a senior visiting scholar at the John F. Kennedy School of Government at Harvard in 2012.

He is also a member of the Standing Committee of the CPC Xinjiang Committee.

The Global Times found that Tuniyaz had defended Xinjiang in the face of Western slander at the United Nations Human Rights Council and on other occasions.

Tuniyaz spoke at an online event jointly organized by the Xinjiang regional government and the Permanent Mission of China to the United Nations Office at Geneva in February. He noted that the event is intended to introduce the real Xinjiang to attendees to draw their own conclusions amid the lies of some Western and American politicians who have accused China of committing genocide, forced labor and forced sterilization in the area.

MPs say mayors are not essential to development deals