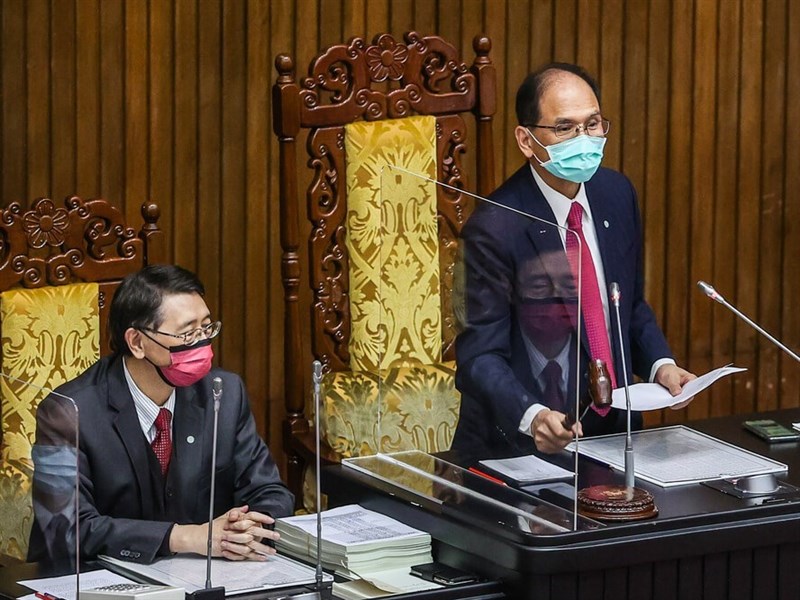 Taipei, Jan. 28 (CNA) The Legislative Assembly hastily passed a general central government budget of NT$2.251 trillion (US$80.75 billion) for 2022 on Friday after cutting NT$27.34 billion of the original expenditure proposal.

The budget bill cleared the legislative floor late in the evening on the last day of a special session, which was called in part to make the 2022 budget.

The final vote came after a four-hour stalemate between the ruling Democratic Progressive Party (DPP) and the main opposition Kuomintang (KMT) over the government‘s announced plan to lift a ban on import Japanese food products from areas affected by the 2011 Fukushima Daiichi nuclear disaster.

The budget represents a projected increase in spending of 5.4% over the enacted budget for 2021.

Central government revenue is projected at NT$2.267 billion for 2022, which would give an estimated budget surplus of around NT$15.9 billion, according to budget figures.

The NT$27.34 billion spending cut was agreed by all four party caucuses in the Legislative Assembly, but the breakdown of the cuts by agency will require further negotiation within the government.

Although small, it will be the biggest reduction of a proposal since 2014, according to data from the legislature.

The Cabinet initially proposed in August 2021 to spend NT$2.2621 trillion in 2022, with 26.6% of the total going to social welfare, 20.1% to educational, cultural and scientific projects and 15.7% to national defence, according to this proposal.

He then proposed additional spending of NT$16.3 billion after the government agreed in October 2021 to a 4% pay rise for public sector workers in 2022.

The bill appeared set to clear the legislative floor by 1 p.m. Friday, as caucus negotiations wrapped up the day before, but around 11:10 a.m. Friday, KMT lawmakers swarmed the president’s podium for a five minute break and occupied it for the next four hours.

The move was in protest against a statement by DPP lawmaker Kuo Kuo-wen (郭國文), who said earlier in the day that the government should lift the ban on Japanese food imports ahead of the Lunar New Year holiday. which begin on Saturday.

The import ban was imposed for food safety reasons on March 26, 2011, about two weeks after a severe earthquake followed by a tsunami triggered a meltdown at Japan’s Fukushima Daiichi nuclear power plant.

For the past 11 years, Taiwan has maintained a ban on food imports from five Japanese prefectures – Fukushima, where the disaster occurred, and the neighboring cities of Gunma, Chiba, Ibaraki and Tochigi.

The KMT has expressed strong opposition to easing import restrictions in the absence of what it calls science-based measures to ensure the safety of Japanese food products imported from the disaster area.

With the Legislative Assembly disrupted over the issue, Friday’s session was halted for about four hours until DPP Legislative Caucus Whip Ker Chien-ming (柯建銘) apologized on behalf of his party. , at approximately 3:30 p.m., after which discussions resumed, and the bill was passed at approximately 6 p.m.

Ker said Kuo’s remarks caused a “misunderstanding” and thus delayed the meeting, but he did not say whether the DPP party caucus supported Kuo’s position on the contentious issue of food imports.

Kuo later posted an apology on his Facebook page, saying his statement to the Legislative Assembly was his personal take on the matter.

Meanwhile, Cabinet spokesperson Lo Ping-cheng (羅秉成) said in a Friday afternoon statement that the government has not set a timeline to resolve issues related to food import restrictions. .

Reports of an impending government announcement after the passage of the 2022 Finance Bill were “mere speculation” and “untrue”, Lo said.

The Legislative Assembly began the three-week special session on January 5 to discuss two budget plans and bills that had not been passed by the end of the regular legislative session on December 31, 2021.