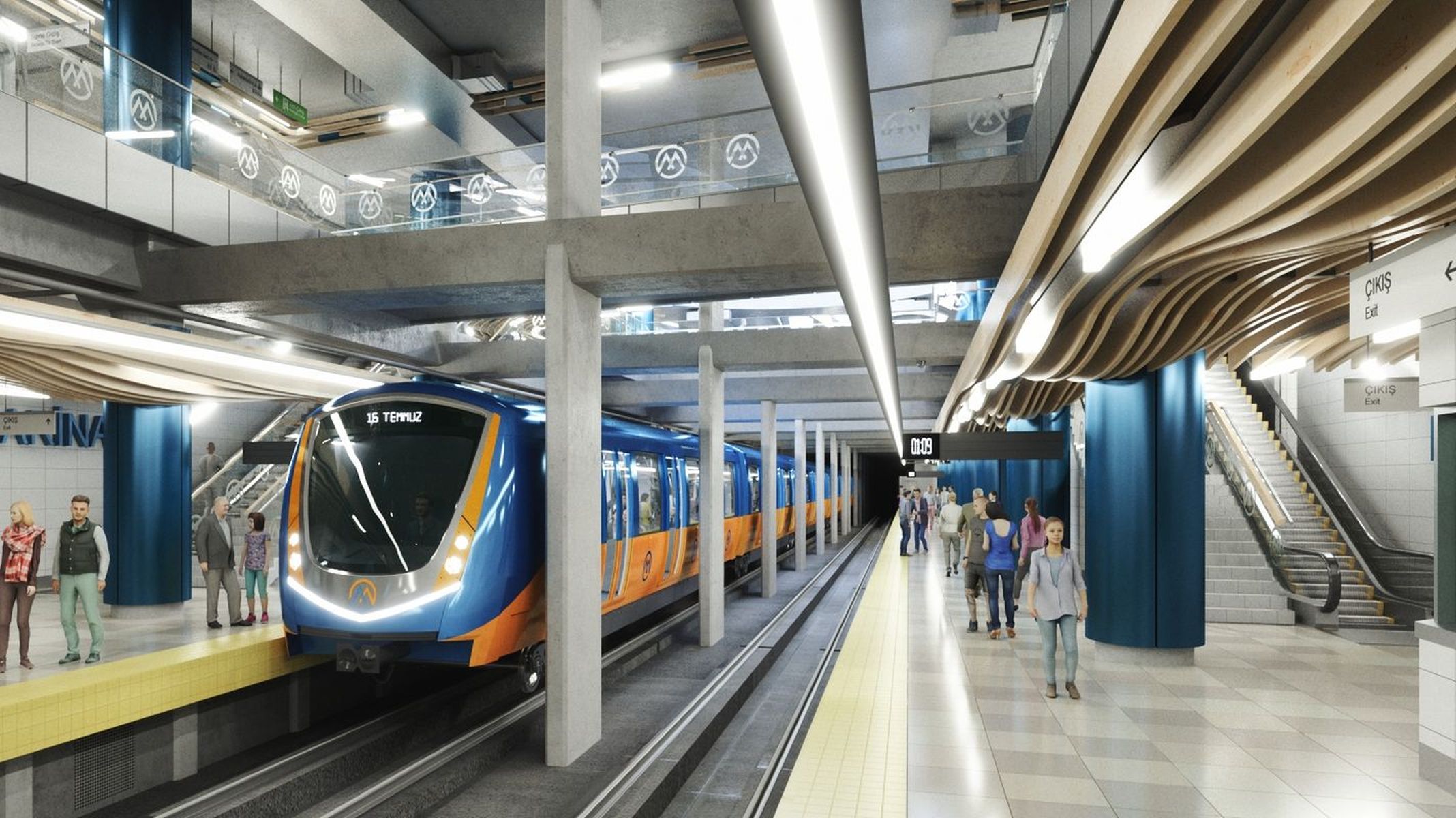 Mersin Metropolitan Mayor Vahap Seçer was a guest of the live broadcast of the show “Gündem Special” with Aslı Kurtuluş Mutlu, which was broadcast on KRT TV, Kanal 33, İçel TV and Sun RTV. Taking stock of 3 years, President Seçer said: “Mersin deserves much better. Everything will be,” he said.

“The state should also give importance and value to social policies”

Describing Mersin as a city of opportunities, Mayor Seçer said, “In fact, it’s a summary of Turkey, a miniature city.” Stating that the city is not well known enough in terms of tourism, Seçer said: “Imagine that you are a rare flower, you are an exceptional flower, but you have not been discovered. I compare Mersin to him,” he said, adding that they had to promote Mersin.

President Seçer mentioned that agriculture and tourism are expensive sectors with a very high initial investment, and said that it is not possible to keep these areas alive if they are not supported by the State. Explaining that agriculture and tourism make very important contributions to the country’s economy, Seçer said, “Of course, not everything is about economics when running a city or a country. country. Because the state is not commercial, the state is social. The state should also attach importance to social policies, value them and have employment policies. That’s why I care about tourism and agriculture,” he said.

In the March 31 elections, in many major cities like Adana and Mersin, CHP mayors were elected. Kazan President Seçer also referred to the political climate that emerged after the President’s death and said, “During the pandemic, either a member of the National Alliance or a non-Alliance member like me. kazanA huge effort has been made in the municipalities with the Republican People’s Party in the localities mentioned above. In order not to see this, either your heart must be sealed or your eyes must not see biologically,” he said. “Have you been stuck in those 3 years? When asked, Seçer stressed that they are struggling, but they want justice, not discrimination.

“The metro means adding new value to the city”

Mayor Seçer, who shared the details of the metro they laid the foundation for saying, “The metro is the most important local government project in history in this region,” said, “The metro means adding a new value to the city. If you want to turn a city into a brand city, you can turn that city into a brand city with such vision projects. If we want to make Mersin a brand city, we have to do extraordinary things. It has been achieved so far; “We are going to build a metro, we are going to build a rail system”. Years passed, citizens had expectations, but nothing could be done. We are here to do that,” he said. Expressing that it has been 4 months since the Parliament received the authorization to borrow 900 million lira out of the 9 billion lira it will spend on the metro in the first place, President Seçer said that the procedures are wasting weather. President Seçer said: “The foundation has been laid, the construction has begun. Here I want to announce to the people of Mersin. There are also false statements and false propaganda. “I wonder if the metro does not , what happened, the foundation was laid? saying. Our first number one station continues from the area we call the old bus station. Our second station is the area where the current station is located. We needed a permit from the Conservation Council. Last week it was released. Our second station will continue there. The third station is the area where the free children’s park is located. It will continue like this. I need financing and I will borrow. If I wait for a signature for 9 months, my job will be in trouble “This must be done immediately. If the presidency has included this in the investment program, the Treasury should sign the necessary signature and release me as soon as possible” .

“Municipalism; I guess it must be to get into people’s hearts”

Stating that Mersin is a city where there are gaps between the poor and the rich, Seçer said that they support those who are below the poverty and hunger line. Seçer said, “Municipalism probably has to get into people’s hearts. We act with this philosophy. If your citizens are hungry, the path you make for them is worthless. We saw this fact in Mersin,” he said. President Seçer said: “We have actually done what needed to be done” for services such as free bread, hot meals, home care for sick citizens, cleaning their homes, food aid , and said , “It seems wrong to me to call them social assistance. After all, everyone is entitled to the taxes collected. In a sense, we, as a municipality, as a mayor, are intermediaries in order to distribute the shares that accrue to us from the taxes collected by the central government, i.e. the rights of that citizen, in an equitable manner. That is exactly what we are doing,” he said.

“The ratio of our female employees has exceeded 22%”

Highlighting that they were the first municipality to implement the local equality action plan, Seçer recalled that they had included a clause in the collective agreement they had concluded with the employees, stating that they separate from staff who have committed violence against their spouses. Seçer highlighted the need to include more women in working life and said, “When we came to management, the rate of our female employees among all of our employees was not even 18%. Currently, this rate has risen to 22%, or even slightly higher. We want to increase it every day,” he said.

“We have public transport for students 2024 TL until 1”

Stating that there are all kinds of opportunities in the city for a student to choose Mersin, Seçer mentioned the services provided by the metropolitan municipality for young people. Seçer said there were neighborhood kitchens in 30 different locations, the mobile truck went to a neighborhood every day, and there was a neighborhood kitchen at the gate of the university. Saying that 3 types of meals are given for 3.5 TL, Seçer said that they offer food to students 2 days a week for free due to the month of Ramadan. Seçer also addressed the issue of public transport for students and said, “We have public transport for 2024 TL until 1st. We will continue to pay 1 TL to our students,” he said.

Stating that the construction of the digital library in Kültür Park continues, Seçer pointed out that they have opened a very different page for education, and addressed many issues ranging from educational support course centers and to training to cover student examination fees, tuition fees dormitory aids. Seçer emphasized that they contribute to equal opportunities in education and said, “That is what the social state and the social municipality are for.”

Stating that agriculture has become an important area with the pandemic and the subsequent Ukraine-Russia war, Seçer said, while assessing the problems faced as a country in this area, “production costs are very high. Talk about fuel; It tripled in 1 year. Talk about the price of pesticides and fertilizers. The grower cannot add fertilizer. Because there is a huge price increase. As a state, you will take measures against this. “Prices have gone up in the world, my dear, what should we do? You can’t say that,” he said. Mayor Seçer explained that they have created a raising awareness by sending the lemons they purchased from growers to the metropolitan municipalities of Ankara, Istanbul, Tekirdağ and Eskişehir Stressing that it is very important and valuable for them to be together as 3 CHP Metropolitan Mayors, Seçer announced that they will welcome 11 metropolitan mayors to Mer sin between 13 and 15 May.

“Mersin is the shining star of the world, not Turkey”

Stating that he never got tired while serving and that receiving people’s blessings made him happy, Seçer said, “Mersin deserves much better. All will be. It will be a more organized and greener city. It is a city where all living beings live in peace. It will be much more peaceful and prosperous. I say this to Mersin; Mersin is the shining star not only of Turkey but also of the world” and has invited investors to the city.

Addressing the problem of the Syrian guests, President Seçer said that the European Union should allocate resources to them under the coordination of Iller Bank within the framework of FRIT II. Explaining the important projects they have carried out in this context, and stressing that despite the work done, no resources have been allocated, Seçer said: “I have been in service for 3 years, 39 million euros; We also signed the protocol for this; We also had very important projects. We did not receive 39 euros more than 39 million euros,” he said.

Calls in Cork for ‘radical investment in playgrounds’ from central government