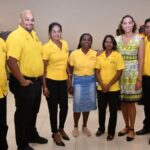 The owners are threatening to evict UNC advisers from the Tunapuna / Piarco Regional Corporation in January. This is a direct result of the failure of the Department of Local Government to release funds to pay homeowners since October 2021.

As representatives of the local government, we are entitled to an office where the bourgeois can be facilitated and which is open to the general public. Any eviction would seriously compromise the ability of councilors to do their jobs and negatively impact the ability of thousands of citizens to bring their concerns and questions to their elected representatives. The owners have also expressed huge frustration as this is a recurring situation.

The local government has been the first responder in all emergencies, this government of the MFN has failed to recognize this important role and continues on the road to destruction! It is ironic that this government continues to spend more than $ 4 billion a month but refuses to pay its rental obligations when provisions were promised in the annual budget debated and adopted in Parliament.

The members of the Tunapuna / Piarco Regional Corporation UNC call on the government to do its job and ensure that all necessary resources and funds are released in an efficient manner for all corporations. It is high time that local government received the prominence and recognition it deserves as the backbone of central government!

If this PNM government cannot do its job, please step back and let the UNC show you how to do the job!

At 80, Tommy Thompson Won’t Rule Another Race for Governor of Wisconsin |…