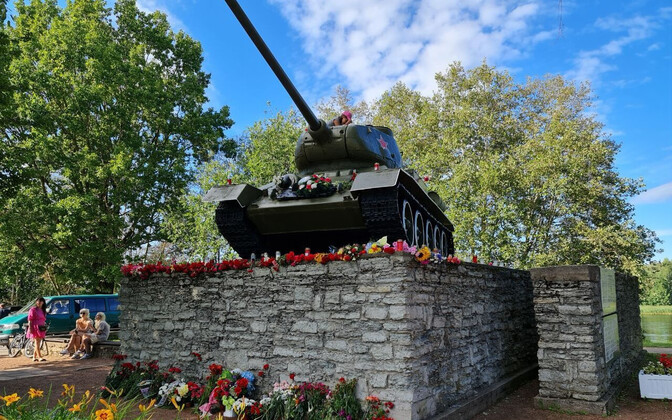 The ruling coalition made up of Mayor Katri Raik’s electoral list (Narva Tulevik) and Eesti 200 took the decision on Sunday evening to order the city administration to remove the monument, a replica of the T-34 tank of World War II, before the arrival of Prime Minister Kaja Kallas (Reform) in the city. Kallas had always said the monument should go, in light of its glorification of Soviet militarism at a time when the Russian Federation is pursuing an invasion of Ukraine, while concerns have also been raised that this would lead to widespread protests and disruption. in the predominantly Russian-speaking city of 57,000 inhabitants, located on the border with the Russian Federation.

The Narva Coalition issued a statement which read: “Since there is great public interest in this monument, we will establish a temporary committee within the Narva City Council, which will make decisions regarding the future of all Soviet-era monuments in the possession of the city of Narva.”

“The creation of such a committee was proposed by the residents of Narva, and we consider it the best step in a situation where we need to clarify everything related to the fate of the Red Army and the Soviet monuments on the territory of Narva,” the statement continued.

Denis Larchenko, head of the Narva branch of Eesti 200, said the proposal is based on the desire to ease tensions around the “tank”.

He said: “We have to make decisions about the future of the Soviet monuments in Narva, and the people of Narva have to do it themselves. We understand very well the tensions that the Narva tank problem has caused in society. , and we don’t want to drag out the process as these tensions continue to mount.”

“Nobody in Narva wants a repeat of another Bronze Night, and we will find a solution to this problem in close cooperation with local organizations. We sincerely hope that the opposition of the city council will also support our proposal and we can go forward with this issue,” he continued.

Larchenko was referring to the April 2007 ‘Bronze Soldier’ ​​riots, which unfolded over several nights after a Soviet-era statue commemorating those killed on the Soviet side during World War II was moved to Tallinn. .

The statue was moved from Tõnismägi in central Tallinn to the military cemetery on the other side of town, where it remains.

The Narva coalition said it would convene a city council session as soon as possible, to formalize the decision and ask city authorities to proceed with the removal of the monument.

It would be moved and then stored in a safe place, closed to the public but in the city of Narva, according to the coalition.

The Prime Minister is due to give a press conference from 3 p.m. after meeting councilors and municipal officials in Narva and nearby Narva-Jõesuu.

Mayor Katri Raik had recently appealed for state help to solve the problem.

Since the “reservoir” has no known human remains buried at the site and as an integral part of the memorial, under current Estonian law its removal or otherwise is a decision of the local government.

The news comes amid Soviet-era memorials, statues and the like being removed both in Estonia and the former Soviet Union and beyond, following the current Russian invasion of Ukraine, which began on February 24.