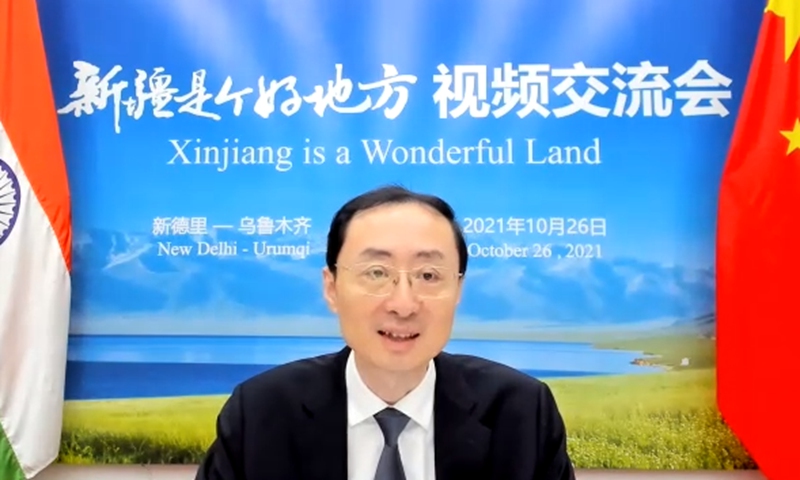 “The facts should not be distorted. The achievements of economic and social development of Xinjiang as well as human rights are there for all,” replied Sun Weidong, Chinese Ambassador to India, to the lies told by some Western countries. on Chinese Xinjiang at a press conference. online conference with people from all walks of India on Tuesday.

“The Uyghur population has doubled in the past 40 years, from 5.5 million to 11.6 million, and residents are leading increasingly wealthy lives with average annual GDP growth of 7.2% in recent years. . They are receiving higher education and a completion rate of nine-year compulsory schooling is now over 95 percent. Is this what Western countries call “genocide?” “Sun asked.

The Chinese Embassy in India on Tuesday jointly hosted an online conference titled “Xinjiang is a Wonderful Land” with the Xinjiang Regional Government to discuss the truth in the region with more than 100 Indian academics, journalists and politicians there. attended by video link.

Speaking at the conference, Ambassador Sun noted that terrorism had previously cast a shadow over the Xinjiang region with the three evil forces of separatism, terrorism and extremism, organizing and leading thousands violent terrorist attacks causing the death of large numbers of innocent people. .

To eradicate the threat of terrorism and its breeding ground, Xinjiang has taken a series of measures to combat terrorism and extremism, including establishing vocational training and education centers. There have been no terrorist attacks for nearly five consecutive years in Xinjiang and security and social stability have been restored to the region, Sun said.

However, some anti-Chinese forces in Western countries continue to fabricate sensational lies for political ends and to launch untenable accusations of “forced labor” or “genocide” in Xinjiang.

Sun refuted these lies about Xinjiang with solid data and pointed out that countries that criticize and slander Xinjiang have a bad history of racism, religion and human rights with the horrific systemic ethnic cleansing and the massacre of indigenous peoples.

“What they have to do is reflect on themselves. Are they able to pretend to be the “human rights defenders” or the “instructors” to teach others? Sun said.

The Chinese Ambassador to India also noted that China and India are two major developing countries. “We have similar positions in the fight against terrorism. We have the common tasks and aspirations of economic and social development, as well as the improvement of people’s livelihoods. Seeing is believing. We invite our Indian friends. to visit Xinjiang after the COVID-19 pandemic to talk to local people, see for yourselves and get a very nice picture of Xinjiang. “

Jarulla Hisamidin, vice governor of Xinjiang Uyghur Autonomous Region, gave a comprehensive introduction on economic and social development in Xinjiang at the conference. Representatives of vocational training and education centers, religious clergy and local residents of Xinjiang were invited to join the conference via a video link to share their own stories.

For example, a Kashi Prefecture intern named Estula told his own stories of how he was influenced by terrorists and lost his job at Kashi Airport.

“Suspected friends invited me to watch videos about terrorism and taught me to follow jihad and“ go to heaven. ”Under their influence, I came to hate infidels and I thought about how to go to heaven, and even beat my wife. in addition to learning the law and distinguishing religion from extremist thoughts, he also had trade lessons.

After graduating from the training center, Estula opened a store to sell eyewear, and he can now earn over 10,000 yuan ($ 1,566) per month.

Abdula Rehipla, imam of a mosque in Hotan Prefecture, also presented religion policies in Xinjiang with his own experience to refute rumors that the regional government is “suppressing” religious groups.

Other representatives from Xinjiang, including a resident of Kashi who works as a tour guide, also took part in the video conference to share their stories and invite more people from India to visit Xinjiang.

The central government is pro-farmer but pro-industry