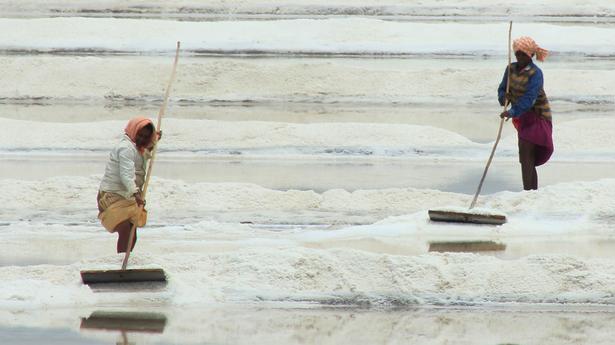 The salt makers urged the central government to collect uniform rent and transfer fees for the land they leased. The levy was higher than what was charged by the Tamil Nadu government for the salt pans it owns, they said.

With a marked drop in salt production in the state and in other states as well, the Center recently convened a meeting of manufacturers and asked them to submit details of the problems the industry is facing.

“Rent per acre per year on state government land is ₹135, while those working on central government land have to pay ₹2,120 per acre per year which is extremely high. This amount was increased in 2013 and manufacturers were asked to pay retroactively. There cannot be two rates for the same product,” said K. Mariappan, moderator of the South India Salt Manufacturers Joint Action Committee.

Another problematic issue was the Centre’s refusal to renew the lease for their land. “This has caused undue hardship for small and medium landowners. The state government renewed the leases and also wrote to the Center asking it to renew the leases. There are private companies that have held salt land for over 50 years. The Center also holds a perpetual lease on the land it took from the Vedaranyeswarar temple in Vedaranyam, which is unfair to other salt marsh holders,” said one salt marsh lease holder.

An industry expert pointed out that the land that had been taken over by the Center remained unoccupied. “They cannot rent salt land to people who want to use it for other purposes and the rates quoted were quite high. People cannot get a return on salt with such investments, which is why many have not even paid their dues,” he said.

If this situation continued, Tamil Nadu, which sold salt to other states, would become dependent. Already, the state had been forced to procure salt from Gujarat, he said and added that the Center should take necessary measures to avoid such a situation.