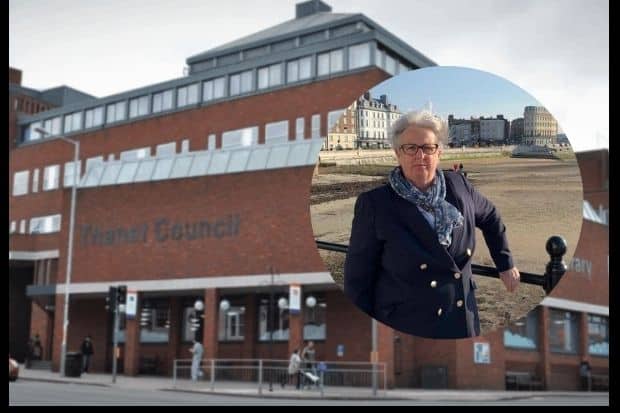 Thanet’s council chief Ash Ashbee called on the central government to step in to deal with culture in the council by “asking the DHCLG for help in, in the public interest, regularizing the governance of the TDC.”

The letter, sent to MP Michael Gove, Secretary of State for Housing, Communities and Local Government (DHCLG) comes amid ongoing disciplinary and grievance proceedings at the authority that have racked up a legal bill of more than 733 Â£ 000.

Of the costs incurred up to June, Â£ 114,000 relate to overall process management, Â£ 111,000 for internal processes under board oversight and Â£ 22,000 for external employment tribunals.

Anticipated / potential future costs are split between Â£ 78,000 for concluding internal Thanet Board processes and Â£ 408,000 for external employment tribunals.

In a report to be discussed by cabinet members on Thursday, the “multiple financial risks” facing the local authority are highlighted as well as the need for action to improve financial management.

Cllr Ashbee said: â€œSince I took over the leadership of Thanet District Council on June 3, 2021, it has become clear to me that the governance of this local authority is not acceptable in its current form.

â€œFollowing a meeting with the then Secretary of State for Local Government in Margate earlier this month, I have now written to new Secretary of State Michael Gove to formally invite the MHCLG to provide the intervention needed to rectify the situation.

“I have done this in what I believe is in the public interest and in the interest of the residents and businesses of Thanet.”

In March, Thanet’s advisers on the governance and audit committee called for action “as soon as possible” to review the culture of authority.

Then-committee chair Mike Garner said the review, which was written for 10 days in the 2021-2022 fiscal year, needs to be “prioritized.”

The Thanet Green Party member added: “My suggestion is that this is one of the first things to be done.”

But the review could not take place until the investigations into staff grievances and disciplinary proceedings handled by the Investigation and Discipline Subcommittee (IDSC) were concluded. It was said that this would lead to an overlap and mean that some issues could not be discussed openly.

There have also been complaints and counter-complaints involving all four members of the management team – CEO Madeline Homer, Gavin Waite, Tim Willis and chief oversight officer Tim Howes, who has since been suspended from his duties. last december.

Mr Willis was also suspended in 2019, but was subsequently cleared of all allegations.

There is at least one staff grievance that has been dragging on since 2019 and is still unresolved.

However, the council’s chief executive, Madeline Homer, said staff were “shocked” by the news.

She said: â€œThe staff are shocked and surprised by this action by the leader, which appears to have been taken without consultation or support between the parties, and certainly without discussion with the management team.

â€œThe Board approaches the conclusion of various grievances and disciplinary matters, with the full knowledge and support of the external auditor and the Chief, who herself is a member of the relevant grievance and discipline committees.

“However, the council will provide all the information the Department of Housing, Communities and Local Government (MHCLG) needs to act in the best interests of Thanet, his residents and his businesses.”

Thanet’s Labor leader Rick Everitt said his party called for Cllr Ashbee’s resignation and said she was “shirking her responsibilities as leader and seeking political cover from the Conservative government as she should take charge “.

Cllr Everitt said he previously asked the external auditor to report on the governance and culture of the organization, which she is expected to do soon, and expressed concern that this is an attempt to replace an appropriate process with a political solution.

He added: “I am concerned that his action will cost the council taxpayers even more money if it infringes on individuals’ employment rights and affects the chances of success of Ramsgate’s leveling offer. , because it will undermine confidence in Thanet at the central government level.

â€œâ€ Cllr Ashbee didn’t even have the courtesy to discuss her actions with me, which is very disappointing as the working relationship between the two main parties has been good since 2019 and that includes between the two of us. I am sorry that she has now chosen to act in this partisan manner and it seems to me that she is influenced by seasoned Conservatives and others with limited understanding of the issues rather than making her own judgments.

â€œTo appeal to the ministry is to admit bluntly that it cannot do its job. However, she should resign and make way for someone who can. “

However, the leader’s actions were supported by North Thanet MP Sir Roger Gale, who said: â€œCllr Ashbee has acted entirely within his remit as elected representative and leader of Thanet District Council. She has my full support in the action she has taken.

Cllr Garner said: â€œIt has been clear for a very long time that action must be taken on this serious problem.

â€œIndeed, we were elected in May 2019 on a platform that included addressing it and we called for openness and transparency.

â€œRecently we have seen the legal fees associated with the ongoing IDSC continue to exceed the Â£ 750,000 mark and we will hear later this week of other significant financial risks that could reduce our reserves to an unacceptably low level.

â€œWe hope that this intervention will finally allow us to resolve the long-standing governance and cultural issues within the commune and to work for the good of all the inhabitants of Thanet. “

A department for upgrading, housing and communities (formerly the Department of Housing, Communities and Local Government), the spokesperson said.: “We are aware of the concerns raised regarding the governance of Thanet’s board and will remain in close contact with the board.”

Support from the GMB union

Frank Macklin, regional organizer of the GMB union, said: â€œThe GMB union welcomes the news that the Thanet board chief has written to the government outlining his concerns shared by the GMB union.

“This is a truly courageous move that will see Councilor Ashbee’s character and reputation attacked by others who could and should have acted sooner, I wrote to Councilor Everitt asking what the result of his own was. governance report that he and Mrs. Homer, the executive director of Thanet District Council, at the instigation of the Local Government Association over a year ago. I asked if the report had already been completed and if so, what were the results and recommendations. “

Mr Macklin says concerns about bullying were raised two years ago and that a member who made an allegation should now see their role redundant in a “restructuring”.

He added: â€œThe outstanding complaints from our GMB members against (the top leaders) have been inaudible for over a year now and Thanet District Council ignoring recommendations from not one but two independent people recommending that all outstanding complaints be investigated. emergency. One of these independent people is a highly respected QC. So if Councilor Ashbee’s letter of concern means that Thanet District Council is finally under investigation for mismanagement and governance, the GMB will offer our full support to this process.

Mr Macklin said Cllr Everitt should work with the head of the board rather than call for him to step down, adding: “The GMB union will support Councilor Ashbee and any other body that supports the government in addressing the many serious issues we are facing. believe are preventing Thanet District Council from providing a safe working environment for its employees and providing a service that the local tax-paying public can be proud of. â€