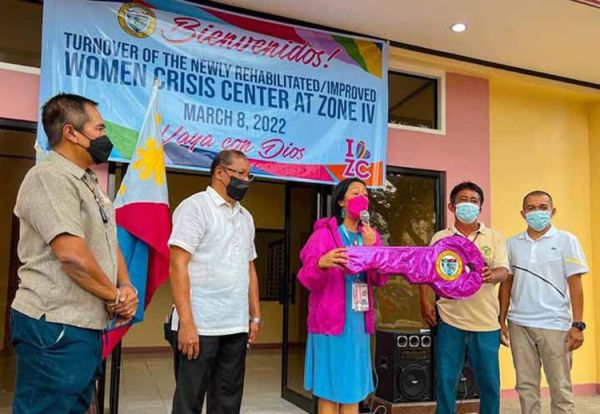 ZAMBOANGA. The municipal government is unveiling the newly rehabilitated Women’s Crisis Center on Tuesday, March 8 in Zone 4 Village, Zamboanga City. A handout photo shows Mayor Maria Isabelle Climaco-Salazar leading the inauguration and handover of the project to the village in Zone 4. (SunStar Zamboanga)

Mayor Maria Isabelle Climaco-Salazar said the project was implemented as part of the celebration of International Women’s Day.

Salazar said the installation demonstrates his administration’s commitment to the protection and welfare of women.

The facility houses a unit of the Inter-Agency Council Against Trafficking run by the Ministry of Justice, as most of the victims are women and children.

The project cost 2.65 million pula and was implemented by a private contractor under the supervision of the city engineer’s office.

City attorney Ricardo Cabaron and staff, staff from the municipal social welfare and development office that runs the facility, and village leaders, among others, were present during the rotation. (SunStar Zamboanga)

SunStar’s website encourages friendly debate, but comments posted on this site do not necessarily reflect the views of the management of SunStar and its affiliates. SunStar reserves the right to delete, reproduce or edit comments posted here without notice. Inappropriate messages will be automatically deleted.

Don’t use profanity. Some words have been banned. Stick to the subject. Do not stray from the discussion. Be consistent. Don’t shout and don’t use CAPS!

DVIDS – News – Courtesy translation: Municipality of Wiesbaden: Almost a hundred pallets of supplies for Ukraine on their way to Wroclaw